A couple months ago, Carrie, my 7 year old (who is also a BIG cupcake fan!), shared something with me.  She said, “Why do you have a cupcake named after Hannah but you don’t have one named after me?”  I thought for a moment and realized I didn’t have a good answer and, frankly, hadn’t given it much thought.  Birdie’s Buckeye is the cupcake I named after Hannah, my 18 year old, because she adores anything peanut butter and chocolate and she loves homemade buckeyes.  Birdie is Hannah’s nickname and has been since she was a baby.  When I  started experimenting with the buckeye cupcakes, the name wasn’t something I really had to think about, it just worked!

The day Carrie posed her question, made me realize she felt a little left out of the cupcake naming.  After all, what’s more awesome than to have a cupcake named after you?

I looked at our menu and, while Carrie can gobble up any number of them and always has a new favorite, none of them seemed right as her cupcake namesake.  I keep a list of ideas and recipes I want to try.  One of the cupcake ideas on my list was something with marshmallows or a s’mores type recipe.  There’s nothing new about s’mores cupcakes but I never got around to experimenting with them.  S’mores have always been a family favorite.  What’s not to love, right?  The night before Casey and I got married (in Yosemite), we stuffed our faces with s’mores.  While most brides are not eating, hoping they fit in their wedding dress, I was inhaling roasted marshmallows sandwiched between chocolate and graham crackers.  To say the least, I was a happy bride!

Hannah and Carrie always enjoy fire pit nights filled with bags of big white mallows, Hershey’s bars and packs of graham crackers.  During the summer and fall months, making s’mores is one of our main activities.  Carrie kind of likes s’mores (I kind of like freckles and big blue eyes, but that’s another story)!

I’m excited to introduce Carrie’s Campfire S’mores Cupcake as the latest addition to our cupcake family! 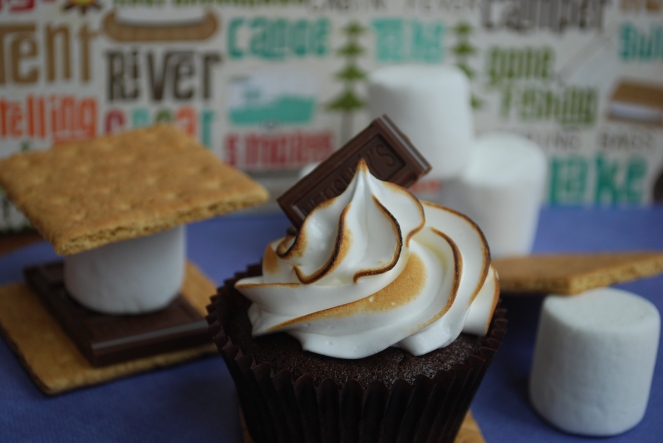 One word…YUM!  This cupcake is AMAZING!  I experimented with how to arrange the s’mores components and, after some trial and error and several taste tests, came up with a winning combination.  These consist of a graham cracker crust in the bottom, dark chocolate cupcake with milk chocolate chips, gooey marshmallow frosting topped with a piece of Hershey’s bar.  In a later batch, I added cute Teddy Grahams to the top but I didn’t get a photo.

This was part of the experimentation process (someone had to do it)! 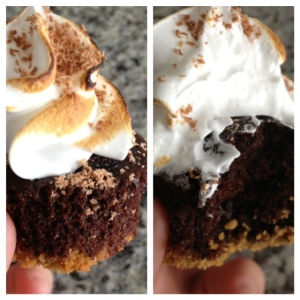 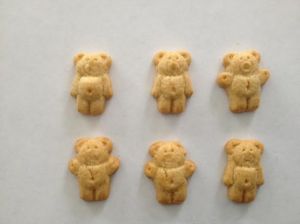 I just love how pretty the marshmallow frosting looks!

With the cold weather and snow, these cupcakes have us longing for summer fire pit nights.  Hopefully, it won’t be much longer!  HA!  Until then, we’ll keep enjoying our delicious Carrie’s Campfire S’mores Cupcakes.  Try them!

From the heart, Shannon

View all posts by Floured Apron

5 thoughts on “Who needs a fire pit?”

For some reason, all I wanted to do today was bake chocolate cupcakes. 💕 Good for the soul! #bakingtherapy #chocolate #cupcakes #homemade
I ordered these cards from @jennawileydesigns and they arrived on Earth Day! 🌎These are absolutely beautiful! I was planning to use these as Mother’s Day cards but I may frame one for myself! 😃#supportsmallbusiness #monarchbutterfly #earthday
Making a fresh batch of treats for my favorite beagle! 🐾💕 #dogtreats #allnatural #beagle
The Queen of Country and the Queen of Ice Cream transported me right back to my childhood! After many days in quarantine, it was amazing to be outside on this beautiful day to try @jenisicecreams newest flavor! It’s amazing! 🍓🥨 @dollyparton @imaginationlibrary
This week:
Happy Pi(e) Day! #piday #homemade #baking #ilovepie