Yesterday was Casey’s birthday.  I usually try to make him one of his favorites when we celebrate.  He loves bread pudding! I’ve never made it for him and this is the year! Since I’m trying to do pumpkin recipes during September, I decided to put a pumpkin spin on traditional bread pudding. That turned out to be a real good idea!

Bread pudding comes in many forms but it’s basically cream, eggs, vanilla and bread baked all together. What’s not to love?

Casey likes more of a custard type bread pudding. As I reviewed recipes, I concluded that to get a more custard like texture, the cream should be cooked and the entire thing should be baked in a water bath.

I wish I could tell you I took the simple route but I really wanted to make this incredible for him. Therefore, I made a few components that all came together to make one spectacular explosion of flavor!

This thing is layer after layer of flavor! Let’s get into making it!

First off is a Vanilla Bean Creme Anglaise. Huh? I didn’t know much about that but it’s rich and full of half-and-half, vanilla beans, egg yolks and sugar. Simmer the half-and-half and vanilla bean and seeds then slowly whisk into the eggs and sugar mixture. Strain it and cool in an ice bath. Look at all the pretty vanilla bean flecks. It should be smooth and beautiful! Pop it in the fridge until it’s time to dish up your dessert. 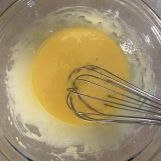 Spicy Caramel Bourbon Sauce is not difficult to make, but it definitely requires your attention because there’s boiling sugar involved. The flavor of this sauce is not for people who fear flavor. I’m one of those people who love flavor and concluded this sauce belongs in everything. I added it to my coffee. I kept thinking about it hours after I finished making it. It’s unique and so, so good! I’ve never used star anise in anything before. It packs a little punch! Oh, and there’s bourbon. 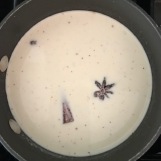 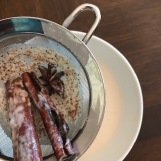 You just have to watch that sugar and catch it right when it’s at the amber color stage and quickly whisk in the warm cream a little at a time. This sauce can be made ahead of time, just stick it in a jar in the fridge. Well, I mean, after you put some in your coffee. Warm it up later to pour on top of the bread pudding. 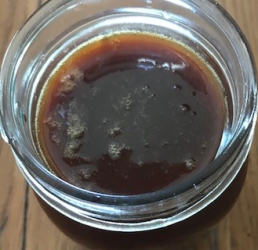 Now it’s time to get going on the main dish. You may already have your pumpkin pie spice and pumpkin puree made if you caught my last couple posts. You get to use them in this recipe! Cream, milk, eggs, sugar, spices, pumpkin, vanilla, bourbon and BREAD! 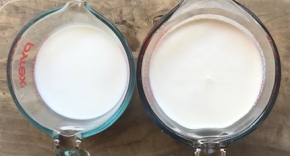 I’m using challah bread. You can certainly use pumpkin bread but I’m sticking with challah since Casey isn’t as crazy about everything pumpkin as I am. Challah holds up well and soaks in all the custard. A nice french bread would also work well. 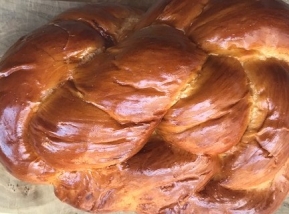 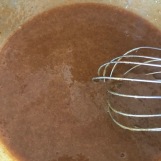 Take a deep breath. Lots of steps and lots of dishes to be done. Grab ya a swig of bourbon. Chase it with some of the challah bread dunked in the caramel sauce. Do the dishes and wait for the smell of the bread pudding to find its way into your kitchen.

Carrie had a field hockey game after school so I made this and left to go to her game. When we got home, I heated up the sauce, Carrie made whipped cream, I got all spun up making sure each one was assembled correctly, we sung, blew out candles and dug in! 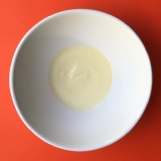 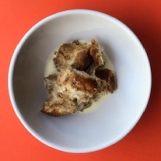 We all loved it! Casey approved and we were practically licking our bowls. I was pouring sauce on pieces of bread from the pan and shoving them in my mouth. You know, the stuff you eat right out of the pan doesn’t count, right? 🙂 The only change I’d make is to use less bread or make more of the custard. Ummmmm. More custard! I’ll do that next time. There will be a next time on this one! 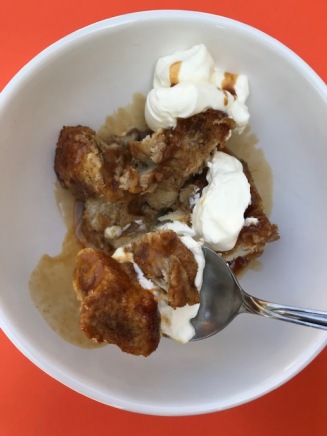 This is one of those desserts that takes time if you want to make all the sauce components (which, I highly recommend). If not, just make the bread pudding part and top it with ice cream or whipped cream and call it a day. You can experiment with different spices, breads and flavors.

Happy birthday, Casey! Thanks for always supporting and trying my baking ideas! I loe you (I know there’s no v…it’s our thing).

From the heart,
Shannon

Recipe modified from foodnetwork.com and my own brain.

It’s here!  Pumpkin spice season has become such a big deal.  It’s in everything and it’s everywhere. I’ve loved it forever. There’s just something about it that’s comfy and pleasant. I feel cozy whenever I add it to a food or drink.

The challenge I encounter this time of year is that pumpkin pie spice is in everything but it’s hard to find the actual spice. It seems like it’s not available until end of October and I get on the pumpkin baking train in September. Maybe August.  It’s also kind of expensive. I make my own. I actually like it more than store bought.

You can make as much as you want. Some for you and some to share. I like to include a small jar with a pumpkin baked good as a gift. It just makes it feel more special!

Start with really good spices.  You’d be surprised at how many extra ingredients are added to spices.  No need for the preservatives or anything else that’s not the spice name. The great thing about making your own pumpkin pie spice is you can MAKE IT YOUR OWN! This is the combination I like! Bring on all the warmth with cinnamon, nutmeg, allspice, cloves and ginger. Combine and store in a jar or container. 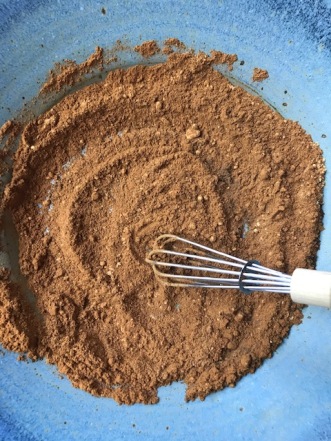 I use this mixture in all my fall pumpkin baked goods and drinks. It’s yummy in cold brew and hot coffee/tea (I add it to my coffee grounds before brewing) and much less expensive and more healthy to make your own seasonal drinks at home. All the pumpkin things need the spice: breads, crème brûlée, cinnamon rolls, pies, cookies, french toast, oatmeal, coffee, cocktails and anything else you can put a fall spin on.

I indulge in this spice throughout the fall and winter seasons. As a matter of fact, since typing this, I’ve felt the urge to put on a big sweatshirt and enjoy a little pumpkin pie spice treat (that recipe will be posted tomorrow)! Cozy up, friends!

From the heart,
Shannon

Combine and place in an airtight jar or container. You can double or triple this to make enough to share.

Switched up @halfbakedharvest Stuffed Croissant French Toast to feature local peaches. I hope your weekend is just peachy!🍑😂 @countrysidefoodandfarms @dillonfruitfarm #local #summer #peaches #frenchtoast
Summer market vibes! @countrysidefoodandfarms @dillonfruitfarm #shoplocal
🍓🍓🍓🍓
I went to @haymakerfarmersmarket in Kent today. I mostly went so I could try @bexicecream! Go find Rebecca and her goodies! #farmersmarket #plantbased #icecream #ohio #vegan
For some reason, all I wanted to do today was bake chocolate cupcakes. 💕 Good for the soul! #bakingtherapy #chocolate #cupcakes #homemade
I ordered these cards from @jennawileydesigns and they arrived on Earth Day! 🌎These are absolutely beautiful! I was planning to use these as Mother’s Day cards but I may frame one for myself! 😃#supportsmallbusiness #monarchbutterfly #earthday